Misturas has been the company responsible for the construction of the new health center of O Outeiro, in the municipality of Ponteveda (Ourense), the works of which have been recently finished.

The works, promoted by the Regional Ministry of Health of the Xunta de Galicia, include a new two-story building, organized in a single compact volume with two protruding porches that indicate the entrances to both floors. The building is free from architectural barriers and has an elevator that connects both stories.

The ground floor houses a meeting room/library, locker rooms and cleaning areas, urban and healthcare waste stores with communication distributors, and the general facilities room of the building.

The upper floor holds the reception, with a direct access to the medical records file, scientific areas for gynecology and obstetrics, and a large waiting room leading to the medical and nursing consultation areas. Each room is equipped with a curtain to separate the examination area from the doctor’s office.

With a constructed surface of more than 400 m2, the building also has a staircase that communicates both floors and an accessible inverted flat roof on top of a reinforced slab. 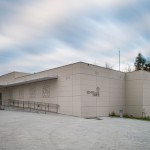 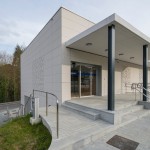 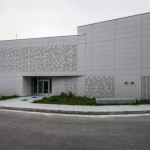 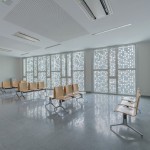 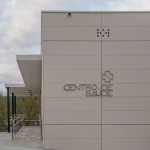