Opening of the new health center of Barbadás, built by Misturas

A joint venture between Misturas and Extraco has been in charge of building the new health center of A Valenzá, which opened to the public a few weeks ago in the municipality of Barbadás (Ourense).

The new building, promoted by the Galician Health Service of the Xunta de Galicia, covers a surface of 2,000 square meters and is made up by three volumes: two lateral blocks and a central one. It is located on a clearance in the mountainside of the densely populated area of A Valenzá, very close to the capital, Ourense.

The main entrance to this singular building is on the ground floor, under a fair-faced concrete cantilever. The central area houses the locker rooms, waste warehouse, utility rooms and the pediatrics practices, as well as the technical and emergency rooms. One of the lateral spaces of this floor houses the area devoted to the women’s program, the midwife practice and a health education room; on the other side, there are installations rooms, the boilers and other maintenance areas for the new premises.

The upper floor only covers the central part of the building, where the general medicine and odontology practices are located.

The lateral structures are set back with regard to the central area. The southern area houses the entrance for ambulances and service cars and it is finished with a garden by the sidewalk. A new public square has been created in the northern area, with green spaces and stands that, apart from being of service for the citizens, were built as an emergency evacuation element for the upper floor.

Concrete highlights among the materials used (more than 3,500 m3). All the façades are covered with 10-centimeter grey sheets made of fair-faced concrete and anodized aluminum, which give sobriety to the building. Inside, the colors used combine white and grey, distributed along the different rooms of the building. 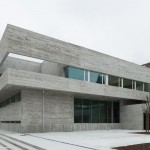 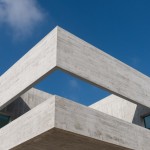 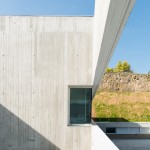 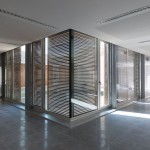 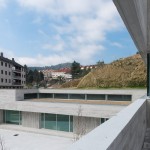 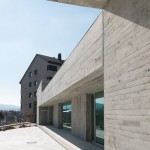