Misturas is awarded the cleaning, transport and waste management service for the Southern ports of Galicia

Misturas has been awarded a service contract by the Public Entity Portos de Galicia. The “Cleaning, transport and waste collection service for the ports that depend on the Southern Area” will be carried out over the next two years. More specifically, it will cover 43 ports dependent on this autonomous body, which belongs to the Department of the Sea of the Regional Government of Galicia (Xunta).
In addition to the general cleaning service, which includes the cleaning of the water surface, buildings and gutters, as well as a complete rodent control in the facilities, the contract, which will be in force from early 2017, also encompasses works of separation, reuse, valuation and recycling of waste collected at these ports.
The new vans for transporting staff, waste trucks with a rear garbage compactor, a truck with a container and crane, a sweeper on a truck chassis, a container washer truck, and a special vessel for cleaning the surface of the water highlight among the material resources provided by the company to develop these tasks. In addition, the team is made up by 17 people, including the service manager, team managers, drivers, cleaners and workers.
All ports covered by this contract are in the province of Pontevedra, most notably in the towns of Vilanova de Arousa, Tragove (Cambados), O Grove, Portonovo (Sanxenxo), Combarro, Bueu, Cangas, Moaña, Baiona and A Guarda. All of them will be used as a hub to carry out tasks in the rest of the facilities. 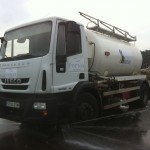 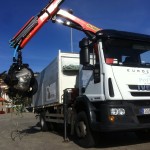 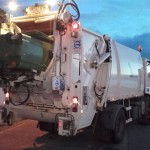 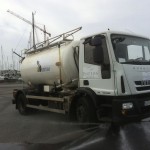