Misturas joined the international campaign to raise awareness about the railway level crossings, an initiative promoted by the Worldwide Railway Organization (UIC) to commemorate the International Day of level crossings (ILCAD), held on June 2 and in which the Spanish Railway Technology Platform (PTFE) and the Spanish Railway Foundation, institutions with which the company regularly collaborates, participated.

In this ninth edition, the campaign, which warns about the distractions on roads and their consequences on interconnections with railways, was led by the slogan “Together for a safer crossing!”

Misturas regularly participates in various working groups of R&D&i within the Spanish Railway Technology Platform, particularly in those of Infrastructure and Track Platforms, Track Superstructure and Maintenance of fixed Railway Facilities. 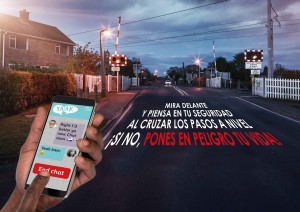